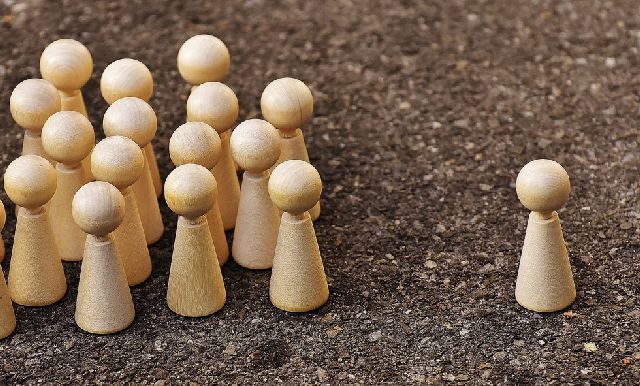 Inequality, exclusion, and fully fledged racism - all items were in the spotlight recently. Whilst most of all countries fall under democratic forms of government, in every society and most of organisations there are differences between different groups which might reach open discrimination of different forms.

How can we explain this phenomenon and what can be done against it?

"Do you want equality and same chances without discrimination?" If asked directly, most persons would agree with this statement. But why do we see regular cases of discrimination, gender inequality, racism, struggles between generations or exclusivity in elites and company boards?

Is it only a few that set the tone and sentiment of many? What is below the surface?

In my view, there are two basic factors impacting heavily

It matters in which kind of society and family we grow up, which friends we make and what we experience over the years. There are specialists on the subject, so I won't dig too deep here - but in general: the more you learn that variety, tolerance and diversity are positive values the more you will sympathize with them. If you as a person feel accepted as an individual, the tendency to discriminate others will be weaker.

The contextual side is important, but there is something working more in depth.

The human species is primed to work in groups, this had been the survival mechanism over thousands of years when humans were not on top of the food chain. The limit of ~150 persons, that you can handle as your physical network still nowadays, roots in this ancient way of survival. The group meant everything in this hostile environment.

The second key element for survival for the human species was to develop shortcuts for life saving decisions (e.g. the rule fight / flight / play dead). As a consequence, strong patterns formed which were ideally working for survival - without any need to enter consciousness. If any threat was close, the need for reflection or cognition did not have any value in this situation - the right intuitive decision (e.g. to run away) defined survival or death.

We still carry these patterns within us - because of progress, their value for us decreased over time. In today's modern life context some are harmful when we still apply them in situations where a rational response would be more adequate - we speak of unconscious biases.

Categorisation is one of the basic patterns which we learned to apply long ago. What does it mean? Elements of external information are grouped together and associated with a basic judgement. Typically, this is binary - positive or negative, good or bad, black or white - further differentiation is a conscious process that might follow as second step only.

This means a quick complexity reduction and condensing of information, thus simplifying what our senses report back from the environment. In the stone age this was helpful, for instance to immediately see if the object on the ground is a piece of wood or a poisonous snake. The shortcut proved both valid and useful.

Nowadays, the danger to die from snakebite is extremely limited in large parts of the world. The context developed significantly, not so our unconscious patterns. Whilst the desire to categorize and simplify is still working within us, the external information judged with the shortcuts, is of different nature - the result might be neither valid nor beneficial, the intuitive conclusion wrong.

So what? Categorisation and quick judgement still have their place in modern life, however not in every situation. The first recommendation is to simply be aware that these patterns work within every human, so also within you.

The shortcut used to unconsciously judge humans is called In-group bias. It means the tendency to prefer people who we perceive as belonging to the same group as ourselves. Perceived similarity creates sympathy, perceived outsiders are judged negatively. This basic mechanism is still in place as in the early days of mankind (e.g. own tribe = good, enemy tribe = bad).

The effect on discrimination is obvious - the in-out group bias works whenever there is an attachment to a defined group (sex, age, race,…also less "severe" ones like your football team, the membership in online groups etc). The danger is to draw the lines too sharply and too binary, based on simple features as the colour of the skin. An additional dose of poison is added via the confirmation bias (see this article for more) which tends to strengthen the perception and judgement of certain features of the out-group by the in-group (e.g. opinion that “women cannot drive cars” > strengthened when the next report of an accident involving a woman is seen and shared within the in-group).

Issues at the workplace

Interestingly, the phenomenon is strongly present in daily working life as well - you likely have experienced organisational "silos". Another field of application are personality type assessments (according to a study 80% of Fortune 500 companies use Myers-Briggs categories for personnel decisions). The criteria of validity and usefulness should be in place here as well, unfortunately some widespread systems like Myers-Briggs do not fulfil them. If you happen to be judged as non-fit to a defined target category (e.g. in the recruiting process or for promotion as you are not predicted to be the right person), the affect is less diversity in companies as well.

Second recommendation: whatever is the context, take a critical look which categorisation mechanisms are in place. There might be the need for systematic de-biasing measures, for instance to replace invalid tools or to add additional steps in the decision-making process.

How could it work? In my last corporate job, I had to re-form my team. I deliberately chose diversity - 50% female, different professional backgrounds & nationalities as well as perceived characters (based on my subjective judgement, caveat here). My experience was that is felt strange sometimes, exactly since I did not choose clones of myself. Especially in the beginning there were difficulties to get rolling, however in my view it is exactly the team leader's task to take this challenge. We invested time in team building and in learning to value our complementary skills, abilities and points of view. The pay-out of this investment came surprisingly quickly, in terms of performance, team spirit and attitude. I can definitely recommend investing in diversity!

Particularly important point: diversity trainings are discussed controversially and rightfully so. You can create awareness by a training and get impulses to reflect but you cannot change deeply embedded patterns by this. The limbic system in the human brain is the ancient home of many biases, behavioural changes do not happen by giving information to the cognitive system only (as done in a training set-up). Systematic de-biasing goes beyond that and involves learning new Patterns. A basic Training fits well in the beginning but is only the first of four steps in my opinion. Contact me to get more information and to discuss how to tackle this best in your context!

Diversity & inclusion must have their place in our society. It is a hard job to progress in reality as our unconscious patterns amplify the risk of discrimination.

Start with yourself, develop response-ability and radiate wherever you can, making an impact!